In 1972 I travelled to Australia for a working holiday of, perhaps, one or two years. So much for plans.  Apart from two years when I lived in the UK in 2002-4, I ended up staying Downunder for close to forty years. I met my life partner and now husband, Bryan, in 1977 and we are still together 36 years later.

Then, in December 2010, the day we moved into our new home on the hinterland of the mid-north coast of New South Wales, I suffered a rather bad case of heatstroke. When the ambulance officers arrived, I had a blood pressure reading of 220/160 and a pulse of 40.  The officers were worried I’d have a major stroke and shuffle off this mortal coil before they got me to hospital.  My husband, Bryan, who was following the ambulance down the road to the hospital in our car, had no idea if I’d be alive when we got there.

Being a tough old biddy, I did survive and my husband was relieved to find a walking, talking, living Mo when he entered the casualty department of the local hospital.  I guess it wasn’t my time to pop my clogs.  However, a quick shuffle to the Pearly Gates and back does tend to concentrate the mind. We started considering our future, given that our family lived back in the UK. We eventually both decided that we felt our time in this huge, wonderful continent had come to an end. It was a great surprise to us, as we loved living in Australia, but it was such a strong feeling, we both listen to our intuition and we felt we had to honour it.

We did not want to return to the UK due to the weather and the cost of living. Finally, after doing a lot of homework, we decided to move to the Turkish Republic of North Cyprus. Bryan had lived in Famagusta as a child when his father was serving in the British Army, and as an adult close to Paphos when he returned in the late 1950s as a member of the British Army.  He had loved his time on this small island in the eastern Mediterranean. So we decided to take a leap of faith and head for North Cyprus, which seemed less developed and more affordable than the south.  We wanted to live somewhere with the climate and outdoor living style of Australia, and with relatively easy access to the UK.

Going back a few years to 1998, we had our home in South-East Queensland up for sale but had no idea where we wanted to move to. One day Bryan came in and said he’d had a vision of a sea or lake between two hills or mountains which had been incredibly clear to him. He looked quite shaken as he’s very logical and not given to visions of any kind.  We never saw anything remotely similar to this vision and over the years it faded although it was never quite forgotten.

When we first landed in Cyprus, we stayed in a house close to the Karpaz Peninsula. Things didn’t work out in the house we had rented, so we set out shortly after our arrival to drive to Kyrenia and check out this area of the island.  As we drove up from the Karpaz, we crested the hill between two mountains either side to see the Mediterranean sparkling in front of us, a brilliant blue and stretching towards infinity, with a bright sun shining down from a cloudless sky.  This was the exact scene Bryan had seen in his vision fourteen years previously. 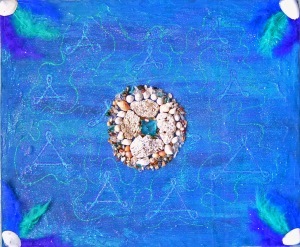 As for myself, all my life I’ve been drawing a triangle with loops on the end, in my mind, in the air or on paper. When we lived in Victoria – yes, we’ve moved around a lot, our friends call us Geriatric Gypsies – I created a painting full of these looped triangles. It also had an island in the middle composed of a turquoise glass pyramid surrounded by seashells. The details were slightly obscured as I’d also added a couple of layers of net. This is the original painting and I called it Aphrodite.

In Bowraville, our last place of residence in Australia, I got the urge to re-visit this painting.  I took off the net layers, cut out the island, and complete re-created the background. This second painting was more lively and joyful, it had stylised birds in it, and I called it: “The fear of flight, the flight of fear”. 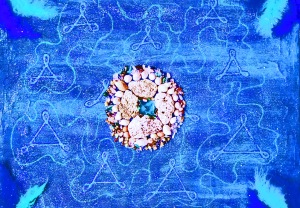 It wasn’t until we were in North Cyprus that I revisited photos of all my paintings and I felt the hairs rise on my arms when I looked at the original painting. It was quite clear that the stylised triangles were, in fact, “A’s”.  At the same time, I realised that the second painting in this series represented the fear we faced at leaving Australia and landing in a strange country at the rather senior part of our lives.

It was also clear that the “A” stood for Aphrodite, because Cyprus is Aphrodite’s Island.  The Goddess of Love is reputed to have been arisen from foam on the sea in south Cyprus close to Pathos.  You can find Aphrodite’s Rock and Aphrodite’s Pool today in the area around Paphos. And just to round out the picture, in astrological terms, Venus (aka Aphrodite) rules my natal chart in astrology as I have my Ascendant, Sun, Mercury and Neptune in the first house, all under the benevolent gaze of Aphrodite.

In other words, I realised that I too had been drawn to Aphrodite’s Island, although why I have no idea.  I do know that the two of us love it here.  We feel at home. We love the kind, friendly and helpful people.  And where we live, just outside of Kyrenia on the north coast, we face north towards the Mediterranean and south towards the magnificent Bes Parmak Mountain Range which runs parallel to the north coast, from just before the Karpaz Peninsula to slightly west of Kyrenia.

Here’s the final painting in the Aphrodite series: 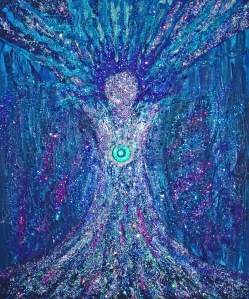 We feel we’ve both come home. And I personally know that I’m now on Aphrodite’s Island to finalise my book which has spanned three countries in the making – England;  Australia;  Cyprus.

This site uses Akismet to reduce spam. Learn how your comment data is processed.