Canyons of My Mind – Domestic Violence (42)

There are two backdrops to the situation in my home as a child, teenager and adult. The first is the underlying effect of domestic violence in my mother’s family.  I adored my maternal grandparents because I knew, when I stayed with them, I was loved unconditionally.  I’d spend hours wandering on my own in the big garden, the fields beyond the garden, and the small copse just below the house beside us which was the last along the lane. This was Blackheath where a bit of paradise was tucked away down this lane and I used to step outside the back gate, listen to the wood pigeons cooing and feel absolutely happy in my solitude and among nature.

So it was a heck of a shock when my mum told me, when she was on holiday in Australia in early 1975,  that my grandfather used to beat my grandmother when my mum, brother and sister were kids, as he was a sweet old man who spoiled me no end. Mum said the kids used to run when he was in a rage to get away from his violence but my grandmother copped it the worst. I guess they must have made their peace in their middle and old age as they seemed happy together as I was growing up.

My mum did think that my grandmother had intended shooting through to her mother in West Hartlepool, in the north-east of England, but  changed her mind when mum said something to her – what it was is lost in the midst of time. But the effects passed down generations. My uncle beat my aunt and he also came close to beating my cousin so hard he could have inflicted serious injury had my father not stopped in. My aunt married a violent man – again there was some sort of violence between my aunt and uncle when they were staying with us, I remember the shouting and yelling, and again my father intervened with my aunt and uncle leaving the next day.

I guess my mother felt safe with my father as he didn’t indulge in physical violence. Instead he resorted to emotional abuse because if Mum crossed him in any way, he wouldn’t talk to her for a couple of weeks, just sent her to Coventry.  I never realised this as they were good at keeping up a front at home, but she told me later when they’d emigrated to Australia in 1978 after I’d moved there in 1972.

As for me, Dad was a control freak as far as my whereabouts where concerned. I was kept close to home as a kid with curfews which earned me a big scolding if I came home a bit too late. Luckily Dad had no idea of how far I used to roam and the escapades I used to get up to once I was out of sight of our home.  He used to try to steam roller me if I expressed opinions but, luckily for me, I found the courage to argue back.  I know it’s made me very stubborn in my opinions, mainly because I felt so threatened by his overbearing behaviour. I’ve never handled bosses well either because anyone telling me what to do instantly puts my back up and I head out to do the opposite!

Dad was, to some extent, a psychic as he used to know what upset me and he’d go for my underbelly with his words.  I remember once, after Mum had died, that he told me how she’d worried about my weight.  It hurt me no end and I caught a look of malicious glee on Dad’s face as he knew he’d managed to stick the knife in and turn it. He’d praise other people around him knowing it hurt me that he never once had a good word for me. In all our life, he never hugged me or told he me loved me, and never gave me praise or approval. The only photo we ever had together was when he was finally in a nursing home, and the closest contact we had was when we had linked arms at my mother’s funeral and he squeezed my arm as her coffin began to roll behind the screen after the funeral service. 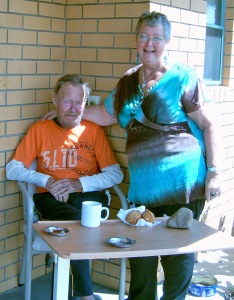 One of only two photos of me and my father, when he was in the nursing home.

This site uses Akismet to reduce spam. Learn how your comment data is processed.